This is a graphic collaboration between writer David Britton, author of four Lord Horror novels, and John Coulthart, known for his promotional and CD cover art, and also for his book of Lovecraft-derived comic strips and illustrations, The Haunter of the Dark.
Reverbstorm was originally published in serial form and is now being presented in a single volume for the very first time.

In the nightmare metropolis of Torenburgen, new York’s Art Deco architecture has fused with the termination machinery of Auschwitz. In this urban inferno Jessie Matthews is singing Sondheim, James Joyce is at work on a new novel, and Lord Horror, ex-Nazi propoganda broadcaster and Torenburgen’s model citizen, is stalking the streets in search of fresh victims for his razors. Murderous apes infest the alleyways, Ononoes feast on the living and the dead, and trains arrive with bodies destined for the charnel furnaces.

As in the Lord Horror novels, Britton counters the ghastliness of Fascism with a ghastly ironic satire. The satire has sometimes been lost on those offended by Britton’s works. His first Lord Horror novel was the last work of fiction to be banned in Britain. This graphic work features the singer Jessie Matthews (long safely dead) as the muse of Lord Horror (who was inspired by William Joyce a.k.a. Lord HawHaw, the wartime traitor and Nazi broadcaster).
So what did I think of it?
The black-and-white art by Coulthart is great, and some full-page panels feverishly evoke a nightmare world of death, extermination machinery and horrid creatures. Others echo images from Picasso’s Guernica, or the post-impressionist work of Georges Seurat. Some sections are blackly humorous, for instance when Lord Horror sings about an encounter with the police:
“A-standing on the corner, a-swinging my chain, along came a copper, and he took my name …” Apparently this is a quote from a real rockabilly song. I liked the caption texts which reflect various cultural sources (listed in the appendix).
Collectors may care to note that this volume includes Reverbstorm #8, previously unpublished. The art for #1 – #7 has been re-captioned. 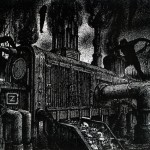 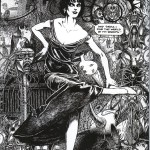