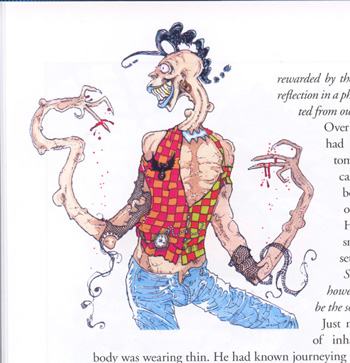 In Britton’s books “Lord Horror” is a fantastic character inspired by William Joyce, Lord Haw-Haw, of wartime infamy. The principals of Invictus Horror are Meng and Ecker, twins subjected to “scientific” experiments by Josef Mengele. They’re not nice – Ecker is rational but violent and Meng is a mutant with a huge cock and tits. In this novella, the terrible twins are celebrating Christmas at Lord Horror’s residence in Manchester with some unsavoury violent and anti-Semitic activity.
Would-be readers should be aware that, as in his previous Lord Horror novels, Britton counters the ghastliness of Fascism with a ghastly ironic satire. The irony has sometimes been lost on those offended by Britton’s works, his first Lord Horror novel being the last work of fiction to be banned in Britain.

The novella is illustrated by a riot of colour and monochrome illustrations by Kris Guidio, which evoke the fantastical world of Lord Horror but have no direct connection with the text.
Although published this year, and after David Britton’s illustrated Lord Horror novel ‘La Squab’ of 2012, this short novel is a riff on the ending paragraphs of Britton’s ‘Motherfuckers’ which ends with Christmastime in Porchfield Gardens, Lord H’s Manchester residence where the Twins are holidaying.

“Invictus Horror” was fun in its gruesome way. I liked the illustrations a lot, though they’re not matched to the text (there’s no La Squab in the text, for instance.) Not sure if it really develops the Horror opus any further than the four previous books did, but with the artworks it’s a nice book to have.
Savoy Books