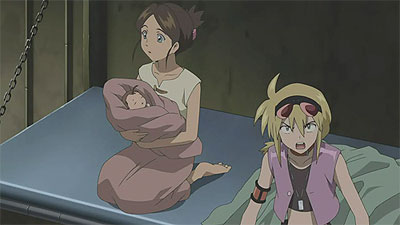 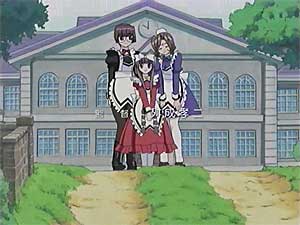 Kokoro is the youngest of three sisters who run the Kokoro Library founded by their father. The library is big enough to serve a city, but is situated in remote coutryside, and consequently is rarely visited. On Kokoro’s first day at the front desk, there is just one visitor, a young woman who borrows a book that she read as a child. A week later nobody at all turns up on the day appoined for this book’s return.
Upset, Kokoro checks the address and goes to the city to retrieve the book.

I watched only the first episode. The scenario is unconvincing, and the characters, the designs, and storyline didn’t do anything for me. Not recommended. 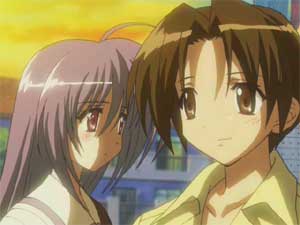 “Iriya’s Sky Summer of UFOs”
A six – episode OVA series – a school story with a mystery, set against the background of an unexplained war.
Asaba is an ordinary high -school boy who lives with his parents and younger sister. During the school holidays, he sneaks into the school swimming pool building for a quiet swim, and is surprised to find a girl swimming there. She gets into difficulties and has to be rescued. They are disturbed by an intruder and when Asaba leaves he is shocked to find a whole security detachment outside, waiting for the girl.
When the term starts, Asaba has another shock when the girl enrols in his class. She acknowledges Asaba but is rather distant with the other students.
Asaba is a member of the Newspaper Club (actually just two people at this point in the story) which has been trying to investigate activity at the nearby Sonohara air base. When they learn that the girl, Iriya, has some connection with the base, the club president pressurises Asaba (who needs little persuasion) to date Iriya and so find out more about the base.
As the series progresses we find out more about Iriya, and a state of military emergency is declared.
I was sufficiently intrigued by this series to download all of it after seeing episode 1. It’s the kind of drama that makes more sense when watched for a second time. In retrospect it is more than a little reminiscent of “She, the Ultimate weapon” which has a not dissimilar premise. The sense of crisis and threat of war also looms in other anime, for example the recent masterpiece “The Place Promised in our Early Days”. (Do the Japanese feel they are living in a potential crisis zone?)
In places “Iriya no Sora” is very funny, and in others sad and touching, and occasionally just unconvincing. So worth watching? In summary it’s no masterpiece but worth a look.

The ‘Attack no 1’ drama is based, somewhat loosely, on the classic shoujo sports-anime of the same name. The original ran to 104 episodes so, even with 11 x 50 min episodes, the drama is somewhat shorter. 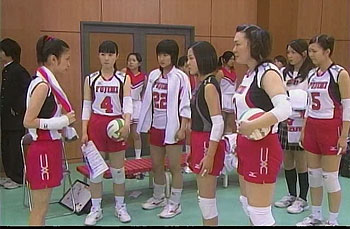 The story re-uses elements from the anime in what, one has to say, is something of a mish-mash, and adds some significant new plot elements. It would be tedious to compare and contrast all the changes, but if you have seen the original (better known in Europe as “Mila Superstar”) you could figure them all out for yourself. Enough to say that in the drama, Kozue Ayuhara (girl in red shorts at far left of pic) is a senior high school student at Fujimi High, and a member of the volleyball team. She isn’t the captain or the most highly regarded player so there is shock when she is called to the National training camp instead of her friend Midori, by the notoriously severe coach Inokuma.

Here she finds herself pitted against a number of skilled and experienced players, and Inokuma, for reasons of his own, makes her acting Captain, a role for which everybody including Kozue feels she is unfitted! However Kozue wins over the players, including the unpleasant but gorgeous Sanjo, who turns out to be .. but lets not disclose that spoiler. Kozue soon falls foul of Inokuma’s ruthless tactics, and there are several more anime-style plot twists before the end. In the last episode, the National team plays in an international tournament.
The original anime Attack no 1 was essentially a straight drama, even if the action occasionally seemed a but implausible, and rather than depicting volleyball realistically, it aimed more to be about the psychology of playing competitive sport. (The anime Attacker You contains more realistic animated volleyball.) The drama is constrained to show real girls knocking real balls about, but off-court, which is most of the time, has an anime-like plot which if anything is more over-the-top than the original… It certainly has quite a light feel and one is left with the impression that one isn’t meant to take this drama entirely seriously.

Whether one has seen the original or not, this drama is great fun to watch, and a knowledge of the sport is not required. Comparison with the “other” sports-drama derived from a classic anime is inevitable, and while both are worth watching, some think that “Aim for the Ace” is the better of the two. 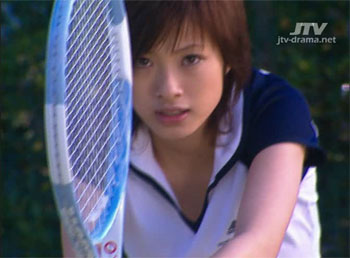 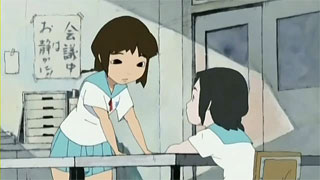 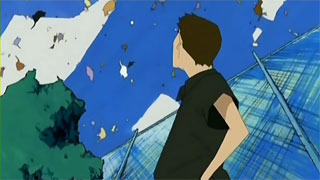