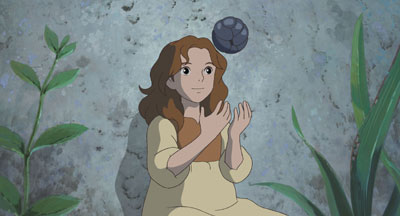 This is the latest movie from Japanese animation studio Studio Ghibli. It is an adaptation of Mary Norton’s “The Borrowers”, with the location changed from 1950’s England to 2010 Japan. The Borrowers, who are tiny humans, with no magical powers, live under the floorboards and exist by “borrowing” small objects and supplies that won’t be missed. An invalid boy, Sho, sees them and sets off a train of events, including a developing friendship between Sho and the tiny Arrietty, and the other humans becoming aware of the presence of the Borrowers, a disaster that could force the Borrowers to flee their home.

The story starts slowly, but becomes exciting and filled with dramatic tension. Children will enjoy many sequences, such as the danger-filled forays into the human-sized rooms, and Arrietty’s encounters with bugs nearly as big as herself, and her perilous forays into the great outdoors. Â Outside, she seems in constant danger of being attacked by crows or the cat. Arrietty makes a brave and resourceful heroine, though her reckless behaviour could be the Borrowers’ undoing. Clearly her developing friendship with Sho is not going to end well.

Adults meanwhile can enjoy the animation, which is filled with bright colour, and pays attention to such things as the effect of surface tension in water at a small scale. Much is made of the contrast in size between the Borrowers and human artefacts.

To compare this with other Studio Ghibli movies, it’s a further return to form after the disappointing Tales from Earthsea (Gedo Senki ) of 2006. It’s less epic and more of a children’s movie than some of the earlier output, e.g. the rather violent and bloody Princess Mononoke, or the early Nausicaa.
Unusually, there are two English-language dubs, one British English, the other American English, as well as a Japanese language/ English subtitled version. The British English version, which I heard, is a very well-acted dub and entirely satisfactory.

(Those unfamiliar with the Japanese animation scene may assume that choosing an English dub is a no-brainer, and wonder why there is an ongoing sub v. dub dispute. The fact is, that many enthusiasts prefer the more authentic experience of hearing the original Japanese sound-track, and not entirely without reason. There are technical problems in making a translation that is accurate and also fits the previously animated mouth movements on-screen. English dubs, particularly those made cheaply for direct-to-video release with un-rehearsed actors, have acquired a deservedly bad reputation: hearing a much liked anime first with the original sound, and then in a poor dub, will put most enthusiasts off dubs for life. Also, it can be jarring to hear all the characters of an anime obviously set in Japan all talking with American accents.)

During World War II the Japanese used some hi-tech codes to prevent their military communications being read by their enemies. However they believed that even if the codes were broken, the inferior foreign devils would not be able to read the Japanese text anyway. On both counts they were overconfident, and code-breaking led to some significant Japanese defeats, such as the battle of Midway, and the shooting down of a plane carrying Admiral Yamamoto.

Let’s assume you have Â an interesting-looking Japanese manga that nobody has translated (scanlated).Â  END_OF_DOCUMENT_TOKEN_TO_BE_REPLACED

I’ve made my own scanlation of Hyouge Mono manga ch #5. Here our aesthete hero Furuta Sasuke is impressed by his master Oda Nobunaga’s new castle. Like so many things in this manga (and anime), this castle really existed. It was destroyed by fire a few years after its completion. It’s almost unknown for a manga (and anime) to depict Nobunaga Oda as a man, as this one does, rather than an ogre or demon. If you’re interested in Hyouge Mono and its historical background, you can search out the web postings of a small band of enthusiasts, or read books on the history of this period.

Hourou Musuko (Wandering Son): The episode count signalled the end. It certainly wasn’t a strong wrap-up ending! Beautifully made and sensitively scripted, with several interesting characters, it sometimes felt like a kind of gender sci-fi.

Fractale: The final episode was stupid and annoying – no surprise there. Candidate for the best animated series with the worst script.

Yumekui Merry (Dream Eater Merry): I really liked this series and its main characters, despite its increasingly complicated conceptual underpinnings. The “final battle” sequence was a bit drawn-out and predictable though.

Mahou Shoujo Madoka Magica: Still waiting for last 2 episodes because of problems in Japan, but I thought this was the hit of the season. Deceptively cute at first, then becoming shockingly dark and powerful. Magical Girl anime will never seem the same again. Apr 22nd: Episode 11 maintains the standard. Episode 12 finale is a fumbling anti-climax, but not to the point of ruining the series.

Kore wa Zombie desu ka? (Is this a Zombie?): Loved this for its warmth and crazy humour, and its original characters. Less successful when trying for drama, but overall well worth watching.

Gothic: A 26-episode series, still running.
Level E: I got fed up with the focus on the schoolboys and dropped it.

I expect that the death toll will rise considerably from the current tally of a thousand. It’s clear that scores of square kilometers of built-up area along the coast were totally trashed by the tsunami, and anyone caught in those areas would probably die. Â Evacuation orders were given, but if less than 100% effective, that would leave large numbers at risk. Â On the news aerial pictures, one can see that some people were caught and washed away in their vehicles.

We haven’t heard if the wrecked train seen in the news was one of the two “not accounted for”. Â  As for the lengthy stoppage of train services in the wider area, one can understand that they’d need to have every metre of track, bridge, overhead wire and tunnel checked by engineers just in case the earthquake had damaged something.

The explosion at the nuclear power plant will not be a surprise to those who have for years been warning about just this disaster scenario.

If some of the new season anime is a few days late, it’ll be because the producers are lacking electricity, or transportation, or generally have more pressing things on their minds.

I’ve given the Anime & Manga Database part of the site a refresh to make searching and navigating a little easier, and to highlight the World Masterpiece Theater and Shoujo Anime lists. Also added an option to display anime by date, oldest first.

Over the past year I have been working intermittently on ‘sorting out’ a large collection of anime on VHS tape. The collection, of about 400 tapes -that equals 400 shelf-inches – of tapes very rarely played, was of un-manageable size.

Some of these titles could not be replaced if I were to dump the tapes. Â But a high proportion can be sourced as digital fansubs or as retail DVDs (hopefully not both!)

This winter it’s the turn of the NTSC tapes. Â I sorted out a pile that were already transferred to digital, but found the greatest difficulty in even giving them away to somebody who might enjoy viewing them. Â Clearly in the UK, old anime + VHS + NTSC is a no-go, particularly with people whose brains stop working after they’ve read the words “free animation”.

Now somebody is going to point out that most fans don’t use VHS any more and the young ones never saw a NTSC tape: right.

I found I had several computer DVD drives that wouldn’t work (tray stuck shut) and eventually found a fix. END_OF_DOCUMENT_TOKEN_TO_BE_REPLACED

You may be aware that an increasing number of legal Â anime streaming websites are being launched. For the US there are Crunchyroll, Anime Network, Â Anime News Network, Viz Video, Funimation, Toonzaki, YouTube, Nozomi, and probably others I’ve missed.

UK anime fans get a poor deal, as most of the streaming sites are restricted to the US, and even the ones that work block many shows for UK viewers. I’ve found only three worthy of serious consideration END_OF_DOCUMENT_TOKEN_TO_BE_REPLACED