Japan at the Edinburgh Festival

Japan Experience at the Edinburgh Festival (1996)

The following includes reviews of various Fringe shows which were promoted as part of the 'Japan Experience' at the Edinburgh Festival. 'Renyo' was part of the 'Official' Festival.
I was surprised to find that there were multiple WWW pages devoted to various aspects of the Festival. Such pages included search, booking, etc & seemed to be an essential supplement to the bulky printed Fringe programme. To find them, use your favourite search engine. 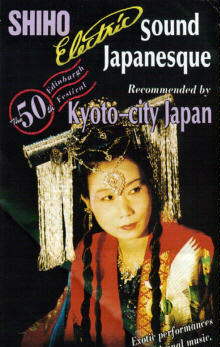 "An exquisite combination of voice, dance, song and sound together with extraordinary and evocative design. Shiho employs electric sounds to recount the Japanese Tales of Genji and much more. A total theatre experience-a feast for the senses."
Shiho is a female musician who has worked professionally with NHK etc. She wears an elaborate and traditionally-inspired costume and plays synthsizer and electric koto, and her husband sings or plays kazoo. I liked the synthesizer sounds, though I thought the music rather formless, and didn't find the kazoo to my taste.
Scotsman review***

RENYO - Far From the Lotus Tomoe Shizune and Hakutobo
"Butoh is one of the most exciting art forms to emerge from Japan in recent years. It is a very contemporary interpretation of Japan's philosophical, spiritual and cultural heritages, allied to a response to modern dance developments in the west. The unique method of movement created has influenced the performing arts throughout the world and Tomoe Shizune is one of its foremost exponents."
"RENYO takes the audience through experiences from birth to death, hallmarked by the simplicity and spirituality that is at the heart of Butoh. The nine dancers, through their slow and detailed movements, create images which emerge and fade on stage like fantasies."
One has to see a Butoh performance to grasp an idea of what this artform is. Here, the dancers move slowly, assuming strange facial expressions, and the lighting and background sound create the impression of a forest with the sound of rushing waterfall, or a more urban space with the lively pulse of music and drums. It seems strongly to represent the old, pre 1850's Japan. The music is as lively as anything heard on an anime soundtrack! The movements seem mysterious yet familiar; I confess I could not identify the 'experiences' noted in the blurb.
Would I want to see and hear it all again? Yes! 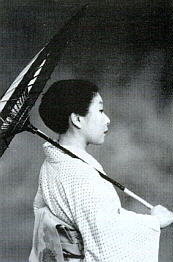 "The subtle nuances of Japanese culture are expressed in the stillness and tranquillity of these classical Japanese dances. Raw emotions and passions seethe in a performance where even the smallest movement has enormous impact."
This was an excellent performance of dances in the traditional style, with slow and subtle movement.

MICHIKO KURIYAMA - dress design (exhibition) "A piece of Kimono, traditional Japanese clothing, is cut from a single roll of cloth an sewn with mostly straight-line stitches so that th finished piece turns out flat, unlike the contoured fit of Western clothes. Therefore, by just adjusting its sash, it has the ability to fit almost anyone."
"The Kimono used to be passed down from one family member to the next for generations; however this tradition has ben forgotten lately in the modern life.
"The Yu-Fu collection has revived the old Kimono spirit alive by changing them into a new form of modern dress. We have tried to cut as little material as possible and sew it straight, following the original method of Kimono. By using your own creativity, you can change the style of this versatile wearable art as you like."
I spoke to Kuriyama-san but my Japanese was unequal to the task of conducting an interview. Some of the fabrics are very pretty. I didn't know what to make of the section of fabric with skeletons all over it. 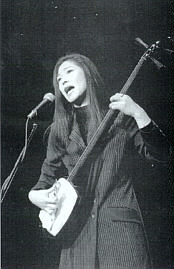 "The 3-stringed guitar originated in rural Northern Japan and uniquely echoes the harshness of nature through its strong, earthy vibrations. Chiyuko brings a feminine sensuality and Mother Earthiness to the instrument with her personal style incorporating modern and traditional techniques."
The shamisen sounds like a banjo and is played with a plectrum the size and shape of a paint stripper. Takahashi-san plays like a virtuoso, with amazing left hand work, and sings in a style that on some songs is as much like Peking opera as anything else. Ace stuff.

YOUICHI KUKUMINATO Photonity (Photograpy and Eternity) - exhibition
"A ray of light in the chaotic world of the end of this century. Life and death, creation and destruction... The esence of each instant captured on film. A collaboration with Shakti by one of Japan's top photographers."
A series of photographs were displayed up the stairwell, and some more, on lavish card mounts, were offered for sale. The photos, many of nature or featuring sultry dancer Shakti, were attractive enough but seemed ludicrously overpriced.
I asked the box office staff if there was a decimal point missing in typical prices of £800 but in the absence of the photographer was left none the wiser. Nor did the Website address (http://www.photoserve.com) prove of any use at all. 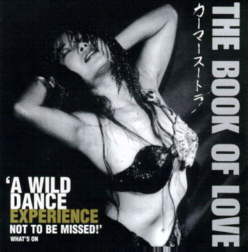 Shakti is not an outstandingly good dancer, being more Artiste than Artist, and the Scotsman reviewer rather rudely gave her only one star, but she scores 5 stars for sex appeal, and in the series of 7 dances superbly evokes the spirit of sensual and attractive Woman. The finale involves a shadow curtain and, shall we say, not a lot else. One reviewer says she dances with "demonic drive" which is fairly close to the mark. Some elements of the dance, notably the second where she lies across a staircase and then a sofa, or the 'bondage' section, with a chorus smothered in real chains, don't work, but the rest makes an enjoyable show, for heterosexual males at least.
Dance-*
Spectacle-****
Pwoar-*****

Shigeru in SPIRAL TALES "Spiral Tales is an ongoing series of movement-based solo-dance pieces, a hybrid of contemporary mime and traditional Noh theatre. 'Tales of the Spider Woman' is a simple allegory, symbolic of the fear and desire for a difference. Featuring an improvised set in which Theramin frequencies are mixed over a digital soundtrack."
Few of you will know what a Theramin is: in fact it was one of the first (pre-transistor) electronic musical instruments, in which the proximity of the performer's body to an oscillator altered its pitch. For the first dance, Shigeru had four electrode pillars wired up on stage, which (probably) altered the pitch of the Theramin-like sound I could hear. For the second dance, a spiderweb was projected on the back of the stage, and the soundtrack included a poem in English. (duplicated on a handout).
I was disconcerted to find that I was the only member of the audience. Possibly this was because the show was a late entry and not listed in any of the Fringe programmes. I liked the music, but found the dance lacked the rigour and expressiveness of the more traditional dances.