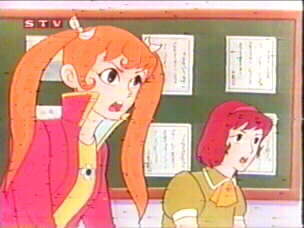 I checked last night on a Polish TV website to see what anime was showing on Polonia1 (a satellite channel) in the early-morning slot. Nowadays there is little anime on satellite TV that would interest those who have access to digisubs, or subtitled anime DVDs. However the obscure low-budget channels from countries like Poland are the exception, for that is where the rare old stuff turns up, some dating form the ’60s and ’70s.
Anyone seen “Magic Girl Tickle” (Majokko Tikkuru)? I thought not. It’s interesting to see this, both for the period animation style, and for the cultural values the animators bring to their work. This one has a scene where a disagreement about love-letters ends in a classroom riot where all the boys are trying to grab the girls’ breasts. Not quite what one would expect in an anime for schoolgirls!

To get this material, you need to be in the satellite “footprint” (i.e. it’s above the horizon and in range), and have the right sort of digital satellite receiving gear. There is information in the satellite section of my website.