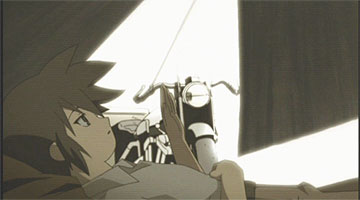 I recently bought the compact box-set of Kino’s Journey. The website already has a long review of it (by Dave Baranyi), but I’d like to draw attention to it and add my own impressions.

A youth rides a motorcycle through a desert. We soon learn that it’s a talking motorcycle, so this clearly is not quite the world as we know it. Nor are the rather allegorical countries Kino visits every three days quite part of the world as we know it. The producers of the anime have sought to give it a rather literary feel, in deference to the original books. In short this is a rather unusual anime, thoughtful, and well-crafted.

To give a flavour of it, in an early episode Kino learns that the inhabitants of one country are living in isolation from each other, because somebody had the bright idea of altering the people so that they could read each other’s thoughts, a circumstance which they soon found utterly intolerable. In another, Kino is under-impressed by a local custom, which she later learns that the inhabitants had just invented and tried out on her in an effort to develop some traditions because they didn’t have any. Kino remarks that they do have a custom, but only so long as they don’t realise it.

And some of the episodes are quite shocking. Not in the worst way, but shocking enough. Overall, though good, “Kino’s Journey” is rather downbeat and after watching a few episodes you might develop a yearning for something funny with cute magical girls in it.