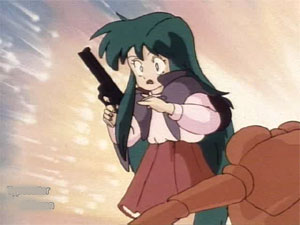 A few months ago I got a download of Dream Hunter Rem episode #1. Years ago I obtained VHS tapes of the Dream Hunter Rem OVAs 2,3, and 4. I was intrigued by the strange un-subtitled episodes and their dreamlike symbolism. Rem – obviously named for the dreaming part of human sleep – can’t ever sleep, but she can enter the dream world, so she uses her powers to be a private investigator of the dreamworld.

In episode 1, which is typical of the format, Rem is approached by an employee of a rich man whose daughter is seriously ill. Rem attends, and finds that the girl is possessed by a swarm of minor demons. Rem then enters the girl’s dream, and does battle with a very big and very ugly demon, which she does initially by transforming into her swords-and sorcery form, involving a big sword and a very brief costume. Eventually she defeats the demon by tricking it into entering the real world, and the girl is saved. Rem suggests that the girl’s well-being would be improved if she found a boyfriend.

It’s a privilege to be able to see Rem #1 at all, as AFAIR it was a limited edition when first released, and so rare that few got to see it. Now, one can still wonder at the bizarre content of these videos, which as well as some ugly monsters include demonic schoolgirls, & a clock tower that turns into a giant robot. For a private investigator, Rem looks quite young, and when dressed in the skimpy metal bikini obligatory for her swords-and sorcery transformation looks more wholesomely chubby than sexy. For some reason, the 1980’s period animation of the monsters is very static with immobile faces when they’re not actually fighting. Rem drives a reather sporty car equipped with a rocket launcher, and has two pets that can also enter the dreamworlds where they transform into larger and more dangerous beasts.