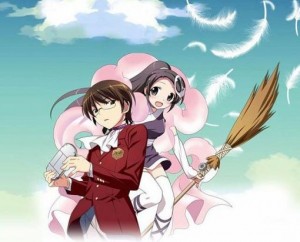 The World God Only Knows was one of the shows I passed over during the Autumn 2010 Japanese anime season, in favour of more enticing works. During a mild bout of ‘flu recently I watched the whole show and found it quite a bit better than I had anticipated. A show about a self-styled “God of Gaming” who doesn’t interact with real girls, and a demonic girl, doesn’t sound like a must-watch. Â In fact, there is a strong script, the characters are well rounded, and the girls are extremely cute (even cuter than the accompanying image suggests). There is no fan-service, which these days could be a plus point! The hero isn’t a hopeless loser – he just lacks social skills and loves gaming. When forced by the situation, Keima approaches real girls with determination, using the knowledge he has gained in gaming. The series pokes fun at the tropes of anime and games. For instance, when Keima comes home trailed by a little magical “half-sister” his mother welcomes Elsie – and promptly sues for a divorce.

There’s also an extended Â and well-scripted story arc involving a shy girl and incidentally promoting the joys of libraries and printed books. Â This is a hot topic in the UK at the moment, where for generations we have had public libraries which are free to all, but are now under threat. Local authorities, having spent too much money on prestige building projects, fancy salaries for executives, and so forth, are now faced with a recession and are looking for a soft target for spending cuts.

One thought on “The World God Only Knows”