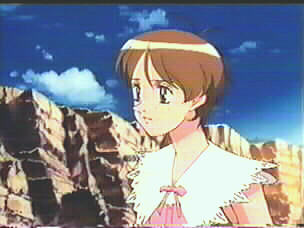 Just received 3 retail DVDs of Escaflowne, which I bought to complete my DVD set of the series. I hadn’t seen these episodes before other than in Japanese, so lost no time in checking DVD#5. First impression is that this is still a great series, and that story, character design, characterisation, and general designs still make the grade by today’s standards. It was a revelation in places to discover exactly what the characters were talking about!
Escaflowne was among a minority of anime in having an original script, rather than being adapted from a manga or novel. If one can altogether trust the interviews in the “Escaflowne Cafe” extras, the production team were aiming to make it a cutting-edge series.

I wonder what we would think of other well-known older anime if we looked at them today. I’m not so sure about the continuing merits of Fushigi Yuugi or Kimagure Orange Road, but I still have a high opinion of His and Her Circumstances (Karekano). KOR has been discontinued by AnimEigo, but other older US-released popular series can now be bought as budget sets that actually cost less to buy than the amount some people paid to collect the early fansub tapes. For instance a US slimpack Escaflowne costs around $50 (Â£25), not much more than the cost of a dodgy Oriental 3-DVD knockoff version.

2 thoughts on “Escaflowne – still great after all those years”