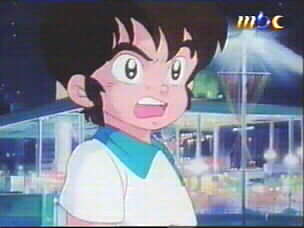 Clearly a baseball anime, with a rather young boy as the hero. It features a real baseball team, (the Yomiuri Giants or something, I can't remember). The other principal character is a teenage girl (called "Melody" in this Arabic edition) who is apparently a classical music star and also interested in sport. This is a lot of fun, (there is a scene where they swap clothes to evade some heavies) and if it had ever been fansubbed would be just as well-known as a lot of other second league anime, such as "I'll Make a Habit of it". If you know what it is, please use the contact form. Girl 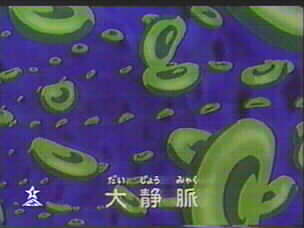 This looked like it might be some sort of inner voyage episode, like they shrink to micro size and go inside somebody's body to heal them.

If you know what it is, please use the contact form. 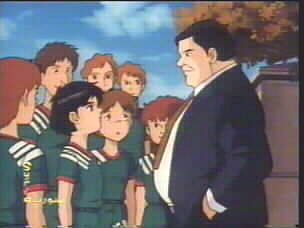 Another football anime, and no, it isn't Captain Tsubasa, or Kickers, or the other "unknown" shown in these pages. It has a non-Japanese setting, probably Italy, and in the Syrian edition the characters have names like "Robert", "Anna", "Katherine". Seems to be a teenage school/ football/love interest drama, probably with as much on relationships as football. Katherine | Anna
Please use the contact form if you know anything.