I have added volume 1 of the “Eccentrics” manga to the other scanlations (of Himetarou, Hyouge Mono ch #4,#5, & Atsushi Kamijo’s “SEX” ch.#1.)
It’s about a schoolgirl who runs away from home, falls from a station platform, loses her memory, and encounters various strange people.
Eccentrics

10 Sept- revised all my online manga to work with “click on image” to advance to next page. 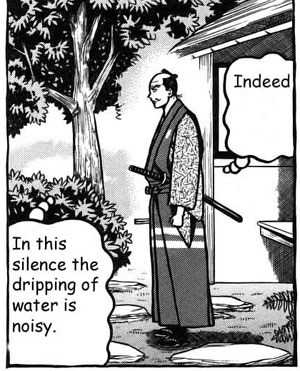 I’ve done my own scanlation of chapter #4 (vol #1,pp 95-114) of the largely untranslated Hyouge Mono manga. (This part is also coveredÂ in the anime fansubs of episodes #2 & #3.Â ) As it turns out, the scenes and theÂ Japanese dialog in the animeÂ are remarkably similar to the manga.Â  This chapter is about a tea ceremony to which Furata, our hero, is invited by Oda Nobunaga’s tea-master, Senno Soueki. I could never quite get the point of tea-houses and the tea ceremony, but after reading this chapter I understand better why it was an important part of Japanese culture. Curiously, Furata does not seem familiar with tea-houses either, though he is clearly an avid collector of tea-bowls and tea-kettles. You’ll find the new chapterÂ via the manga translations part of the nav-bar above. 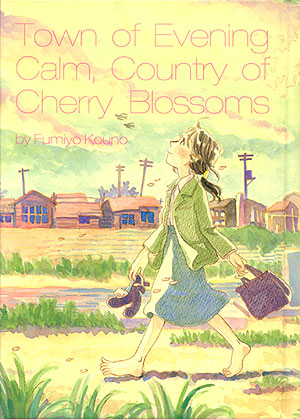 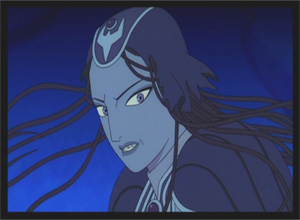 Just finished watching “A Tree of Palme”. I bought it because I remembered seeing it reviewed as being very good but neglected.Â  I had an idea it was some fey period drama, but this turned out to be completely wrong!Â  It’s set in a totally imagined fantasy world – cue major weirdness…Â  If you remember the “Kaiba” TV series, it’s a bit like that.Â  As this is the only anime it resembles in the slightest, it will be interesting to find out if there is any connection. The designs are beautiful.Â  And Palme is a wooden puppet.

I have a shelf-load of translated Manga:

Planet Ladder, by Yuri Harushima. (Tokyopop)
About a schoolgirl who finds strange supernatural things happening around her, and then finds herself dragged into a strange and dangerous magical world. Some think she’s really a princess from this magical realm. This is a rather shoujo-ish manga and the artwork is quite good. There is a rather nice cutie on the cover of vol.1

Bride of Demos, by Yuho Ashibe/Etsko Ikeda (ComicsOne)
Classic manga (1975), with shoujo-style artwork of the period. The heroine is beloved by a demon and finds that horrid things happen to anyone who gets emotionally close to her. Quite a good story. There was a short anime OVA inspired by the manga.

Hot Gimmick by Miki Aihara (Viz Shoujo)
The heroine gets herself in an embarrassing situation, mainly the fault of her promiscuous sister. As result she is open to blackmail by the son of the local factory and apartment block owner, who has recently returned to the area. As the boy used to be a nasty little bully, the omens are not good.
Full of teen angst and tense emotional situations – this is a popular series.

Azumanga Daioh by Kiyohiko Azuma (ADV Manga).
The original 4- frame gag manga series, from which the popular TV anime was adapted. Featuring some schoolgirls, variously sporty, smart, or hyper-active, or just dim, all attending the same school, and their dysfunctional teachers. Excellent characterisations, and very funny. If it doesn’t make you laugh, seek professional help!

Basara by Yumi Tamura (VIZ shoujo)
The classic (1991) shoujo manga. Actually may be an acquired taste – the artwork is nice and it’s quite good describing characters, but, with its wonky future settings, to me gives a strong impression of having been written by a schoolgirl.

Shutterbox by Tavisha & Rikki Simons
This seems to be an American pseudo-manga. The heroine, though not dead, finds herself in the afterlife addending some sort of college. She’s a camera buff. This has nice artwork and is very funny; one of the best and most accessible of this batch of manga.

Figure 17 -Tsubasa & Hikaru, by Genco-olm & Guy Nakahira (ADV Manga)
Small girl moves to Hokkaido with her dad, who wants to become a specialist baker. An alien spacecraft which was carrying some captured nasties crashes nearby, and Tsubasa gets involved with the pilot who is trying to round up the escaped creatures. One of his alien tools accidentally clones Tsubasa into an identical girl/weapon, who enters Tsubasa’a life as Hikaru.
This is a striking mixture of a detailed account of rural life, mixed with sci-fi. There is also an anime, equally unusual in that it was made for TV with 50-minute episodes. Worth checking out.