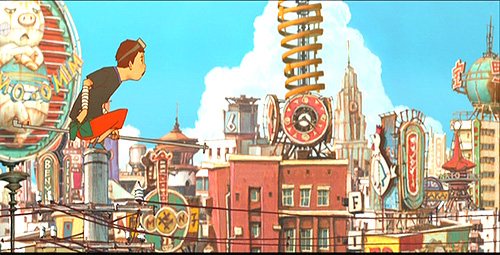 Just finished watching Tekkonkinkreet. Another neglected masterpiece! Unusually, it is directed by an American, Michael Arias, who was also involved with “Animatrix” etc.Â  Less unusually, it has a sound-track by two British musicians.Â  Having seen it, I have to say that perhaps Western direction is what anime needs to drag it out of the mediocricy into which it seems to be sinking.
Tekkonkinkreet (the original title of the manga better known here as “Black and White”) is a Japanese pun on the Japanese word for reinforced concrete.Â  Not that the story has anything much to do with concrete, but if you watch the whole thing you may agree that it kind of makes sense. While the manga was in, er, black and white, the movie explodes into glorious colour.Â  Two street brats clash with gangsters who are taking over their city.Â  The two brats, both of them rather crazy, are portrayed with remarkable depth and sympathy, and White in particular has some great lines.The characters are depicted with a sophistication that is far removed from typical anime, and succeeds notably in making the yakuza characters seem human as well as menacing and nasty. The art uses both painted backgrounds and computer graphics to allow the viewpoint to swerve up and down garish oriental buildings and along twisting township streets, in a way that older animation methods can’t.
http://en.wikipedia.org/wiki/Tekkon_Kinkreet
It cost me Â£5 at HMV.