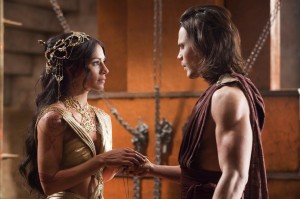 The John Carter movie is now available as a BD or DVD, giving those of us who missed its brief appearance in the cinemas a second chance to see it. For those not in the know, this is an adaptation of Edgar Rice Burroughs’ Martian science fantasy “A Princess of Mars”, written a century ago. Following an incompetent publicity campaign and dismissive reviews, the movie disappeared from the multiscreens in double-quick time. However since then, there has been a groundswell of opinion from fans that the movie is far better than mainstream movie critics said. So I awaited my BD with great interest.
It opens with some cool Martian air-ship action, then has an Earthside sequence of some length, before getting into the Martian action proper. Once Carter’s adventure on Mars starts, the movie is, IMHO, totally great, everything a fantasy adventure should be, with strange creatures, exotic landscapes and cities, weird machines, derring-do, and a gorgeous Martian princess. The technical work is very good, so that the Martian creatures and six-limbed Thargs look like they live and breathe, and the airships fly. If one has a quibble, it is that Carter’s leaps in 38% of earth gravity are rather exaggerated!
Viewers (and critics) should realise that this movie isn’t intended to be ironic, postmodern, or referential. And the original book was written at a time when we didn’t know that Mars was barren and airless.