Now that just about all of the 11 or 12-episode summer TV anime series have ended, it’s time to look back and draw some conclusions about what was worth watching. 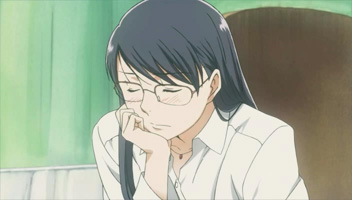 Aoi Hana didn’t stand out at first, but as I continued to follow it, I grew to like it more and more. The subject, girl-girl love among schoolgirls, is one that some will find intriguing…Â  The characters all seemed as if drawn from life, andÂ  were never made to act out of character, as the story unfolded in a natural unforced way. In contrast to many other romance anime, there was no attempt to exaggerate or to contrive humorous situations. Â  While the lead character wasn’t particularly good-looking, many viewers found her – or her facial expressions – very cute.Â  I found that her habit, when alone in her room, ofÂ  throwing herself down to lie contemplating the day’s events, was rather charming. Partway through the series Fumi drops one relationship and continues with another.Â  In the anime, the viewer has to infer how far these relationships went, or might go, but if you read the original manga far enough, it does eventually spell it out more explicitly.Â  The anime artwork is done in a beautiful pastel style, that suits the story well.

Tokyo Magnitude 8 does not disappoint, unless you wanted 11 episodes of structural catastrophe! In fact, this is a disaster as experienced by a young girl, Mirai, and her younger brother Yuuki.Â  There’s less emphasis on large-scale destruction after the first episode, and more on the experiences of the characters as they trek for kilometers through the wrecked city to reachÂ  homes and families that may no longer exist. Towards the end, there’s a wrenching shift of perspective, that will probably send you back to re-watch several episodes.

Spice and Wolf II ended being a disappointment, as it started off promisingly, but never attained the excitement and magic of the first series, instead losing itself in drawn-out business schemes, and tiresome and none too convincing squabbling between Lawrence and Horo.Â  Too often, Lawrence behaves like a schoolboy rather than an experienced traveller and trader. It has an open-ended last episode, so we may get further series until everybody agrees they can’t bear it any longer.

Bakemonogatari is fantastic, with magical curses, gorgeous sexy girls, wicked humour, and an art style that some will love and someÂ  may find annoyingly arty.Â  I’ll definitely buy this if it is issued as a reasonably priced subtitled box-set.

Cross Game (51 eps) is still running, and continues to charm as our two main characters continue to practice their baseball skills and still refuse to accept that by the end of the series they have to stop detesting each other and be a couple.Â  Superb scripting, good characterisations, and manages to make baseball seem interesting even if one has never played. A casually dressedÂ  Aoba looks cute in the end credits too.