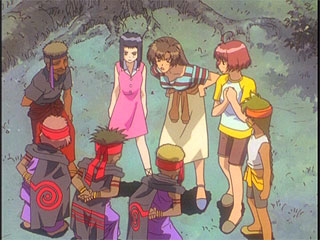 I was reminded about Neo Ranga when it showed up on Catalan TV (TVCi). It was released in 1998, got a US R1 release and has slipped from attention since.

Three pretty Japanese sisters inherit from their missing brother both the throne of an Indonesian island and a god/robot: Neo Ranga.
Unimpressed and suspecting it’s all a con, they return to Japan. However the huge god/robot follows them there; which makes for some interesting juxtapositions of everyday township life; shoot-em-up action; and the activities of the media. The three sisters are very poor; the eldest, Minami, is obsessed with making money, the middle sister, Ushio, is an idealist, while the youngest, Yuuhi, is excited by the power that command of Neo Ranga gives her.

The detailed attempt to capture the effect of weird circumstances on the three girls, and on everyday life – right down to house prices and the trade in local shops – makes “Neo Ranga” worth watching. Various subsidiary characters, such as shopkeepers, an ambitious TV journalist, a police officer keen to pilot law enforcement robots, and the local yakuza, all feature in the action. The activities of the police and armed forces are portrayed in a rather satirical way.

As befits a series made in 15-minute episodes, the action is fast-moving. There are some great images in the opening and closing credits, however in the actual story the sisters keep their kit on.