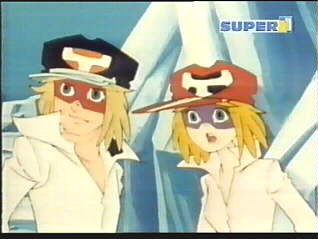 From the obscurity of Polish satellite TV I recorded several episodes of Yattaman, which was part of the long-running Time Bokan anime of the 1970’s. In TB, Junko and Tanpei are the grandchildren of a mad inventor who produced a time machine, before vanishing from history. Also on his trail are the scandalously dressed villain Madame Margot and her two sidekicks. Successive sequels are a variation on this theme.

The high point of Yattaman is the weekly climax with a “Wacky Robot Duel of the Week” which is totally different each week, and in one example I recorded, the bad guys’ tank disgorges as sub-munitions a squad of tiny leotard-clad girls who give Yattaman a bit of a kicking, till his tank launches a squad of mechanical chickens which repel the dancers by pecking all of their clothes off. Enough to make the viewer fall out of his chair laughing.

As farcial anime goes, this sort of thing has been emulated more recently, but for sheer wacky inventiveness in each episode, it has never been surpassed.