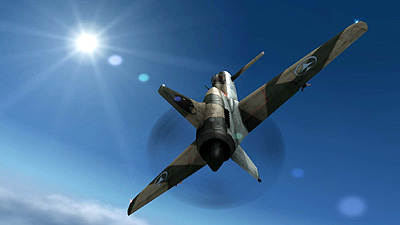 Sky Crawlers 115 mins, dir. Mamoru Oshii, 2008.
This movie is about a group of fighter pilots engaged in an endless but limited war. It’s a great-looking movie with realistic-looking aircraft and superb flying and battle sequences. On the other hand, “Crawlers” describes the pace of this movie. The characters are un-involving and the whole thing is a bit of a yawn – I wonder how many teenagers managed to sit through the whole thing. Its message is that war is bad – yawn, knew that already.
The odd-looking plane in the picture has a “pusher” propeller. You might well wonder if planes like that are real – in fact while the anime one is invented, pusher-prop planes are a reality and some had production runs of over 1000.
The most interesting plane with pusher propellers was the American B-36 bomber. This plane wouldn’t be out of place in a steam-punk anime. In service from around 1948 to 1958, it was of monstrous size, one of the biggest planes ever built, and powered by six 28-cylinder piston engines of 3800 HP each. Later versions had four jet engines added for boost, to give it 10 engines – a record. Maximum range exceeded 6000 miles, maximum bomb load was 33,000 kg. It could cruise at 40,000 feet (50,000- 55,000 in some versions), and could stay in the air without refuelling for over 40 hours. Once built, it was adopted as a strategic nuclear bomber and reconnaissance aircraft, and could carry the first, very heavy H-bombs .