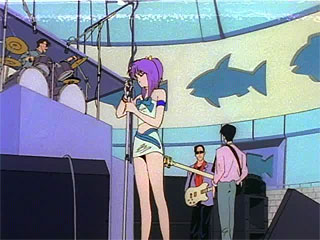 The 1st episode of Legendary Idol Eriko has recently been made available made available as a bittorrent.
This old TV anime is the story ofÂ  Tamura Eriko, daughter of Tamura Kousuke, a music production executive who is killed in a car crash in the first episode. Eriko becomes an idol singer, while her uncle, who wants to take control of the company, tries to block her career.
Actually, in the first episode, the most interesting character is Eriko’s rival, Asagiri Rei, who is seen at rehearsal belting out a song while wearing a tiny tight top and a skirt so short one can almost see her underwear. After giving Eriko a chilly look, she goes off clinging to the arm of Eriko’s father. Though she’s only 15, Rei is not an innocent-looking girl.
The opening credit song is sung by the *real* Tamura Eriko, an idol singer, while the rehearsal and end credit song are sung by Maiko Hashimoto, who on the limited evidence so far seems the better singer.Â  The “Unchained heart” song is really not bad.

One thought on “Legendary Idol Eriko”