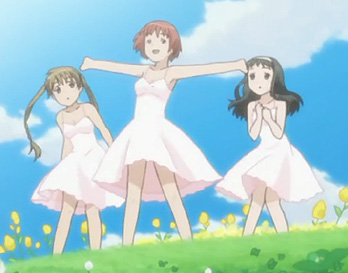 Hazumu enjoys being a girl

I see that I’ve only written one anime review since April, clearly slipping! I’ve ben ill, but that’s not much of an excuse. But I particularly enjoyed Kashimashi – Girl Meets Girl. Kashimashi (which actually means something like “girlish chatter”) is a comedy of gender identity, and how a group of friends react to a change in one of their number, Hazumu.Â  Some of the comedy, like the notorious bra-fitting scene in episode #2, is quite racy.

Hazumu is a somewhat effeminate boy, fond of gardening, who confesses his feelings forÂ  the elegant Yasuna, but is firmly rejected. He goes for a walk on the nearby wooded mountain, but is fatally injured by a crashing alien spacecraft. The aliens manage to bring him back to life, but with one crucial difference – Hazumu is now a girl, even to the level of having female DNA. This incident is splashed all over the news media, while Hazumu is checked over in hospital, and found to be perfectly healthy.

Hazumu’s school friends gather as Hazumu prepares to return to school. They find the new, feminine Hazumu rather hard to cope with, while Hazumu, proudly showing off her new female school uniform, clearly has no problem adjusting to her new gender. Hazumu’s parents have her sex altered in the family register, and while her mother is quite happy to have a daughter, her father is happy in a rather inappropiate way…

Hazumu soon discovers that her friends Yasuna and the tomboy-ish Tomari both have sapphic feelings for her. A relationship is in prospect, but as both girls fight for her affections, Hazumu, a naturally indecisive person, is unable to choose between them.

Meanwhile, Hazumu’s former male best-friend Asuta is disturbed by his reaction to the new Hazumu, whom he clearly finds attractive. These feelings are likely to be shared by the male viewer…

There are also a pair of aliens, visible only to Hazumu, who appear repeatedly, offering further comic relief.

As the series progresses, Yasuna and Tomari compete for Hazumu’s affections. Only in the final episode does Hazumu choose one of them. But which will it be, protective childhood friend Tomari, in whose company Hazumu seems most at ease, or the elegant Yasuna?