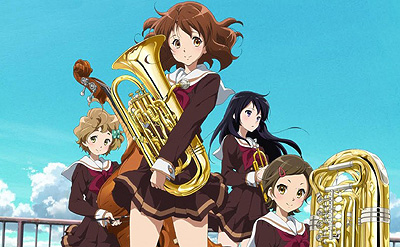 Hibiki Euphonium (Sound! Euphonium) is another anime featuring the fascinating world of Japanese school clubs. Kumiko Oumae was put off playing music because of an embarrassing incident in junior high school, but when she moves to senior high school she is drawn into the school brass band, which is improving under the guidance of an enthusiastic new tutor who encourages them to enter for competitions. Kumiko is persuaded to take up the euphonium again.
The story involves the characters of various girls and sundry minor crises, some involving the beautiful and moody trumpet player Reina Kousaka.
Not an outstanding anime but a pleasant watch.

Yahari Ore no Seishun Love Comedy wa Machigatteiru:
New season of a show I watched a while back. I enjoyed it then and found the second season watchable. Much of the season is about student councils and is making fun of organisation-speak.

Baby Steps:
A second series. The hero is now at tennis camp in America. The first episode wasn’t that exciting, but it seems a new cute girl is in the picture. Dropped after two or three episodes.

Yamada-kun and the Seven Witches:
The familiar theme of gender-swapping teenagers appears again. Yamada-kun is a near-delinquent while the girl is a honor student. They fall down a stair and accidentally their lips meet which (as it does) triggers a body swap. Some saucy scenes as they check out their unfamiliar body parts. Then it turns out that the swapping works with other characters too.
It wasn’t badly done, and quite fun, but I dropped after two or three episodes.

The Fruit of Grisaia (special):
A 50-min special of a show I have not seen before. Turned out to be the backstory of a special forces marksman, and a rather grim childhood. Altogether heavy stuff, not really my cup of tea.