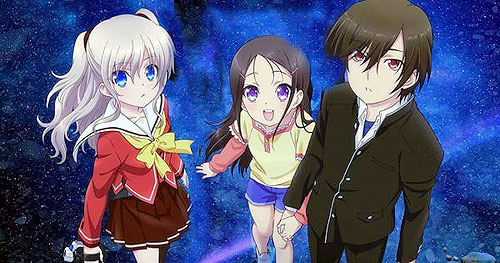 Charlotte was the only new anime I followed through the whole run. The story takes part in an alternate reality where a small number of children manifest supernatural powers on reaching puberty. The protagonist, Yuu Otosaka, develops the power to temporarily possess others, and uses it to cheat at exams. He is exposed by Nao Tomori, a girl who can make herself invisible to a specific person. Nao forces him to transfer for his own protection to Hoshinoumi Academy, and join the student council, of which she is president. The purpose of the council is to contact and retrieve teenagers with powers before they are exposed and experimented on by organisations intent on exploiting their powers.
Yuu, initially dislikable, becomes a sympathetic character as he and the cute Nao contact various teenagers with weird powers. Then there is a head-banging plot twist halfway through the series …
Not a great anime, but an enjoyable watch.

Also checked out:
Akagami no Shirayukihime (Red-haired Snow White): A shoujo romantic drama in which a girl is pursued by a prince she doesn’t like. Silly. Dropped after 1 episode.
Rokka no Yuusha Six heroes are chosen to defeat a demon king. Dropped after three episodes.
Ushio and Tora (2015) remake of old anime. Not bad, but I didn’t want to watch it all again.
Monster Musume no Iru Nichijou A switch-off. Dire.
Okusama ga SeitokaichÅ (My wife is student council president). The main character loses the school council president election to a girl who gives out free condoms and advocates free love. She then moves into his house. I think you can guess where this piece of soft porn is going. 🙁
Aoharu x Kikanjuu Another survival-game anime, but with a girl disguised as a boy. Dropped after one episode.
Gate: Fantasy characters rampage into Tokyo through an inter-dimensional ‘gate’ but are soon shot down. Then the Japanese government launches an inter-dimensional invasion and counter -attack. Potentially interesting idea but the characters didn’t grab me. Dropped.
Shimoneta to Iu Gainen ga Sonzai Shinai Taikutsu na Sekai: Very rude and funny comedy about a Japan where all reference to impropriety is banned. The hero enrolls in the leading elite school of morals, but is soon blackmailed into joining an association opposing public morals and ends up taking part in obscene acts of terrorism against the student council president, a beautiful girl whom he happens to have be in love with. The first episode was a hoot, and clearly directed against the current tightening up of comics and anime censorship in Japan, but I had a feeling the joke would turn stale long before the end of the series..