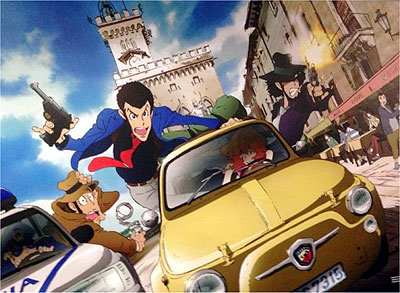 Lupin III (2015) is one of the more entertaining shows of the new season. This show is set in Italy, and was released in Italy this August. It looks much the same as the movies and the dialogue is the usual banter between the familiar Lupin characters.
Lupin is trying to lift the treasure of a small principality and goes through a marriage with an Italian princess, much to the disgust of Lupin’s long-term associate Fujiko.
The wife turns out to be a match for Lupin in a manner other than the intended, and some far-fetched hijinks ensue. Seems she is set to be a new significant character.
Looks like this will be fun.

Young Black Jack: An anime prequel to Osamu Tezuka’s classic manga series about a maverick doctor with a disfigured face. It starts with ‘Jack’ still at medical school but developing amazing surgical skills. In the first episode he re-attaches the arm of a young boy severed in a train accident. In the second he is kidnapped and blackmailed to perform a heart transplant. This is gripping stuff and worth a look.

Beautiful Bones – Sakurako’s Investigation: A teenage boy has an odd relationship with an older woman who is obsessed with collecting bones. Every time they go on a bone hunt, they come across human remains and Sakurako makes forensic deductions. The first episide was very watchable.

Owarimonogatari: Another story in Akiyuki Shimbou’s “Monogatari” series. This looks like one of the more duff sections, as both the new major characters are dislikable and it’s also very static and talky. The first episode on Crunchyroll was a double length, and the whole story is about school student Koyomi Araragi’s awkward past relationship with another student.

Utawarerumono – The False Faces Fantasy series. In the first episode the slacker hero, wandering in a wilderness, is attacked by a giant bug and saved by a young woman who takes him to a village where he is forced to work. Not great, but quite diverting.

Concrete Revolutio: Choujin Gensou, a â€œWatchmenâ€-influenced original superhero series, has turned into a dark and complicated â€œwheels within wheelsâ€ tale that is essentially an â€œanti-superheroâ€ story. It is a wonderfully bleak, bitter, paranoid and smart parallel world story where superheroes and super monsters take the place of nuclear weapons.
Different episodes appear to take place in different eras from the 1930’s to the 1970’s. Essentially, a secret group of superheroes tries to protect the intrests of superheroes and recruit them. In society at large, superheroes are feared and distrusted, and public mention or discussion of them is banned.