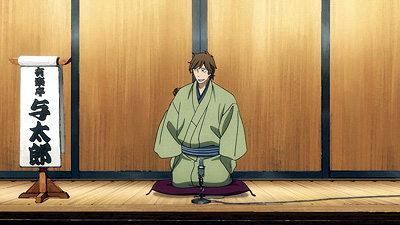 Shouwa Genroku Rakugo Shinjuu is a Noitamina adaptation of a josei drama manga. In the 60s a former petty thief nicknamed Yotaro gets out of prison and becomes the apprentice of a famed rakugo performer named Yakumo. Yotaro joins Yakumo’s household, which also includes Konatsu, the orphaned daughter of a former rakugo colleague of Yakumo, Hatsutaro. Rokogo is a traditional one-man storytelling art form in Japan in which the lone performer re-tells traditional comic stories with very limited props while performing multiple roles in the story.
After the first episode, the story is a flashback to of a younger Yakumo, nicknamed Kikohiro, and his friend/rival Sukeroku, nicknamed Hatsutaro. Initially the outgoing Hatsutaro is a more successful storyteller than the repressed Kikohiro.

Kono Subarashii Sekai ni Shukufuku o is essentially a parody of teens-in-an-RPG-world type stories. Teen gamer Kazuma rarely leaves the house unless he absolutely has to, but one day he does leave in order to buy a new game. On his way home Kazuma sees a girl classmate who is about to be run over and pushes her out of the way, dying himself instead. In fact the girl was in little danger from the tractor.
After his death, Kazuma arrives in a transitional world where a minor goddess Aqua tells him his options. One is to go to a RPG-type world, taking one thing with him. So he chooses her.
Following episodes have Kazama trying to start a quest in the RPG world, and collecting some female comrades, all equally dysfunctional. This show is very funny.

Mahou Shoujo Nante Mouiidesukara
An average schoolgirl is accosted by a ball with wings lurking among the rubbish bags, and the creature tells her that she is a magical girl. She gets transformed and discovers to her embarrassment that her costume is a two-piece swimsuit. The comedy revolves around the creature trying to combat her lack of enthusiasm and train her.
This is pretty funny, and if you don’t agree the pain only lasts for 4 minutes. It feels a little pervy to be watching a pubescent girl in a bikini, though.

Tabimachi Lateshow
Comix Wave Films is producing four episodes with the theme of â€œgoodbyes and journeys,â€ entitled â€œRecipe,â€ â€œTransistor Smartphone,â€ â€œSummer Festival,â€ and â€œCloverâ€, as part of the Ultra Super Anime Time programming block broadcast in Japan.
So says the Crunchyroll trailer.
I watched the first two, and found that while the animation is basic, the scripts are less bland than the usual fare.
In the first of two unrelated episodes, a trainee chef labours to match his mentor’s recipe for what appears to be spaghetti with tomato sauce. (Perhaps a satire on cooking anime shows)
In the second, an episode about a friendly schoolgirl trying to befriend a loner leaves one wondering which of them is the more dysfunctional.
It could be worth checking out this series to see what you make of it.

Bubuki Buranki We start out in what appears to be an idyllic forested setting with ancient ruins covered by plant growth. Two six year old twins frolic through the forest and get into mischief, such as climbing up an ancient â€œNeo Rangaâ€-style mecha-golem giant. Seems that the golems are giant robots being curated by the twins’ mother. Things start to go wrong when the more assertive twin, the girl, climbs on a robot and activates it. Several robots activate and fall to the Earth far below, and the twins and father are sent there while the mother tries to sort things out. Fast forward to ten years later with the boy on a dystopic Earth where super-powered adults and teens battle each other using giant mechas and magic.
The show looks good, being done in 3DCG, but the story is full of rather familiar elements.