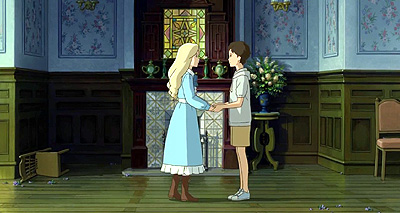 When Marnie Was There (Omoide no Mani) (2014)
An animated release from Studio Ghibli, adapted from the novel by Joan G Robinson and directed by Hiromasa Yonebayashi. The original book was set in England, but the movie is set in Japan.
Anna Sasaki has a difficult relationship with the aunt who is acting as her foster parent, and is sent to stay with other relatives at the seaside. Here Anna fails to bond with the local schoolchildren but meets the mysterious blonde Marnie who lives in a mansion across the tidal marsh. It seems that Anna is the only person who can see Marnie and the mansion is long deserted.
Regardless, the relationship between the two girls develops, but surprises are in store.
This is definitely one of Studio Ghibli’s better efforts, and is a good-looking film that repays multiple viewings. It is less action-packed than some, and in feel it probably most resembles the later adaptations of non-Japanese books, e.g. “Arrietty”. Anna is a more troubled child than any of the other Ghibli heroines, and the movie has an emotional impact. The plot contains some unexpected twists.
I suggest that you get the BD version if you have a player. Recommended.