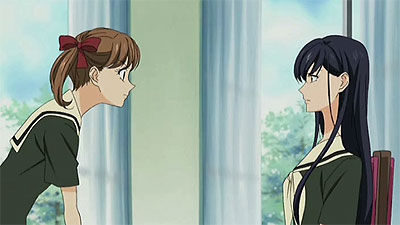 You’ve probably encountered the popular shoujo TV series “Maria-sama ga Miteru” – if not there has been plenty written about it elsewhere, and there’s a review on my website. Now it has spawned a six-part OAV series, of which the first and second parts have appeared.

OAV1 is a treat, as it opens with the main characters, Yumi and Sachiko having a girly squabble. The dialogue in this scene is a delight, and the faces seem drawn with a peculiar intensity. Yumi gets invited to rich-girl Sachiko’s summer residence, but has to contend with the ill-intentioned machinations of other girls of Sachiko’s circle who are jealous of Yumi because of her closeness to the alpha princess. Yumi’s simple honesty enables her to turn the situation around.
OVA2 was a disappointment for me, for the scenario seemed unconvincing, and the treatment weak. Essentially, the girls on the school council want to arrange some meetings with the council at a nearby boys’ school with whom they hold a joint school festival. They have a problem with Sachiko, who dislikes men so much that she can’t bear to be near a boy.