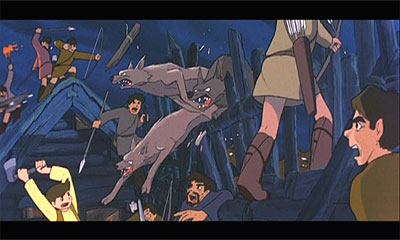 This is the debut feature of Isao Takahata (Grave of the Fireflies, Pom Poko) and is less known than the movies from the Studio Ghibli stable. It first appeared in 1968 (39 years ago!) and has recently been released by Optimum Asia.

I was expecting some rather outdated “classic” and was pleasantly surprised that this movie exceeded my expectations. The dramatic opening sequence, in which the boy Hols fights off a pack of wolves and, losing his axe, makes a final stand atop a rock which turns out to be a slumbering Rock Giant, sets the marker for what is to follow.

Hols, last survivor of a village destroyed by the frost demon Grunwald, takes refuge at a village threatened by Grunwalds’s magic. He befriends Hilda, a lonely girl with a beautiful singing voice, but falls out of favour with the villagers as Hilda is revealed to have a dark secret.

The movie has impressive animation, well realised characters and settings, powerful and touching themes, and some fine music. Particularly pleasing is that the village seems to have a life of it’s own, including fish-drying and a wedding, and is not just a backdrop for the main action.

Overall the movie seems surprisingly modern, and in fact I’d rate it above one or two of the more recent Studio Ghibli output.