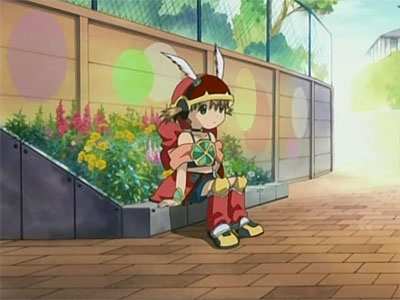 a.k.a. “Fairy Musketeers“. A lesser-known anime in which a young boy, Souta, has disturbing dreams in which he is rescued from a monster by a small girl in a red hat. His mother has told him bed-time tales of twin worlds, one being ruled by science, the other by magic. All too soon the dream starts turning into reality, as Souta finds himself pursued in his own world as the key to a magical power struggle. A monster attacks him and he is rescued by Akazukin and her wolf-companion, Val. 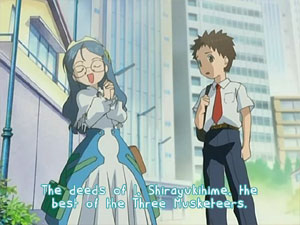 The character names are ripped off from various European fairy tales, and in general bear little connection to the original characters. Akazukin, (= Red Riding Hood) is a warrior girl accompanied by a blue-furred wolf. Shirayuki-hime, (= Snow-White) here is one of the three fairy Musketeers, a skilled magic user, much more intellectual than Akazukin, if a bit full of herself.

On the side of evil are Cendrillon (= Cinderella) a young sorceress with long dark hair and a husky voice, and a fondness for mirrors, Randagio, (= Puss in Boots), a bad cat, and Hansel, a sinister young wizard.

It’s clearly intended for younger viewers, being both cute and wholesome, but I enjoyed the characterisations of the grumpy wolf, the rather ineffectual bad cat, and the delicious Shirayuki-hime. Ringo (curiously named, it means “apple”) is that anime stereotype, the possessive would-be girlfriend, who keeps calling round to make sure Souta gets up in time for school, and to bring him snacks. Souta himself is rather a nonentity, but the vividness of the other characters make up for it.

If you enjoy light anime in which small girls beat up monsters, you should like this one. And those little girls are really too cute.